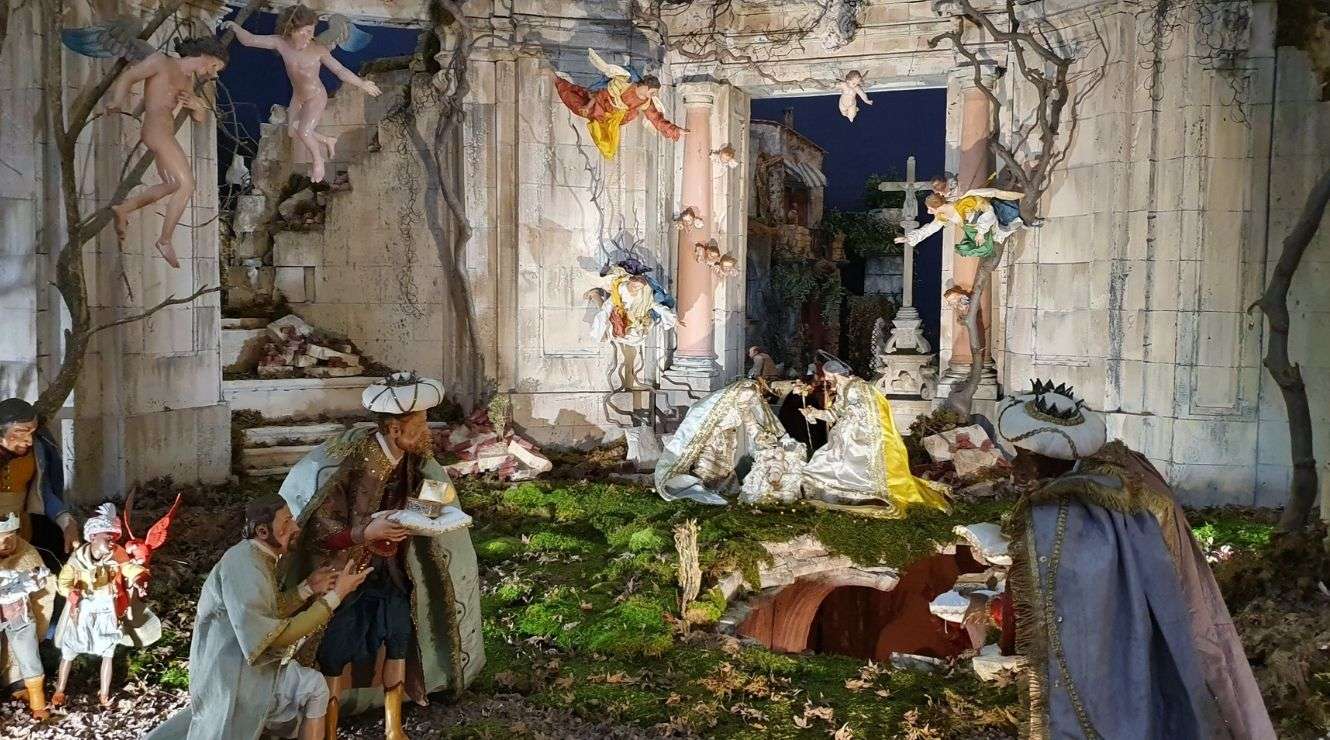 After the hiatus of the pandemic, although with the logical capacity restrictions, the nativity scenes installed in their usual locations can be visited again. In this case we leave you a list of the 6 nativity scenes in the center of Madrid that you cannot miss this Christmas 2021.

Neapolitan Bethlehem of the Royal Palace

Also known as the Prince's Bethlehem because it had its origin in the nativity scene that King Carlos III began to collect for his son, who was Carlos IV.

The collection of the so-called Bethlehem of the Royal Palace has been completed in the 200st century, already consisting of more than XNUMX Neapolitan figures and houses.

Installed in the Hall of Halberdiers of the Royal Palace, as a curiosity, in this nativity scene the figures of Carlos III and his wife, Queen María Luisa de Parma, are represented, as Goya portrayed them at the end of the XNUMXth century. On this occasion, the nativity scene contains references to the Jacobean Year that is celebrated in Santiago de Compostela.

Nativity Scene of the City Hall in Palacio de Cibeles

Composed of 200 Hebrew-style figures of Nativity Scene José Luis Mayo. The figures represent traditional scenes such as the washerwomen, traditional trades or some curious ones such as delousing a child.

The scenography consists of some 20 buildings of great realism that are accompanied by a faithful landscape recreation and has been built by the Madrid Nativity Scene Association. Its rectangular design can be completely surrounded to appreciate all the details. 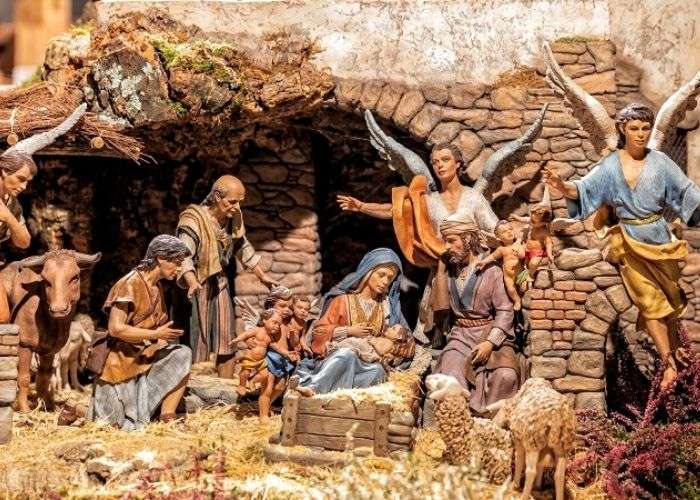 Free admission, upon withdrawal of the invitation at the box office or digital reservation.

Nativity scene of the Convent of Las Carboneras

This nativity scene, which despite its small dimensions is one of the most beautiful in Madrid, is traditionally installed in the Convent of the Jerónimas Nuns, which stands in a square behind the Plaza de la Villa. It is a baroque Quito nativity scene from the seventeenth century, therefore prior to the fashion for the Neapolitan-style nativity scenes that Carlos III introduced in Spain.

It can be admired in a latticed room and its beautiful baroque figures stand out. The ones that attract the most attention are undoubtedly "the Herald" and "the Knight of the Star". Both figures were very common in the nativity scenes of the Habsburg period (XNUMXth century), but they disappeared with the arrival of Neapolitan nativity scenes.

Square of the Count of Miranda, 3

This nativity scene located in the courtyard of the Royal Post Office, has the water as its main character. Made by the Madrid Nativity Scene Association, its particularity is that it sits on three islands that emerge from a large lake with waterfalls, rivers and fountains. In them the traditional biblical scenes are represented. The figures are by Daniel Alcántara, José Luis Mayo, Monserrat Ribes and the Murcian School. Another special feature is that, from the central island, where the mystery has been placed, an olive tree rises more than 2 meters high that represents the “tree of life”. 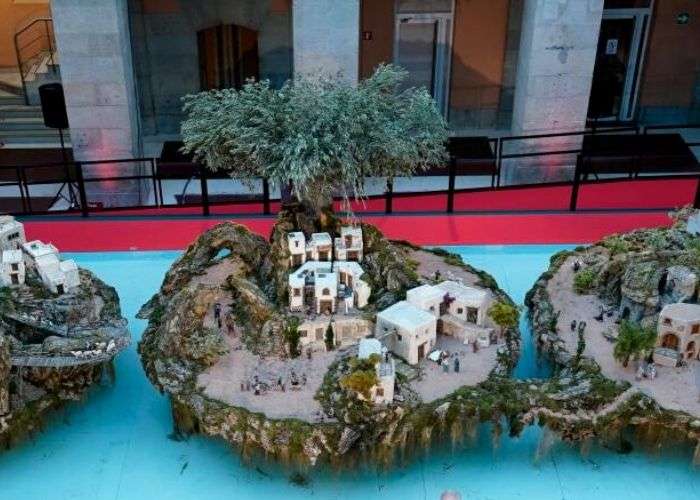 Nativity scene of the church of San Ginés

It is a baroque nativity scene with life-size dressing figures by Antonio José Martínez Rodríguez. Its special characteristics make it a very attractive nativity scene to visit.

Nativity scene of the Museum of History of Madrid

Located in the museum's chapel, a valuable sculptural group of 50 figures makes up this Neapolitan nativity scene from the XNUMXth century. The traditional portal is in this case a classical temple in ruins and in it you can see popular Italian figures, dressed according to eighteenth-century fashion. The baroque figures are articulated, and reproduce with great realism and expressiveness figures such as shepherds, peasants, bourgeois, nobles. Some of them stand out for the richness of their clothes of rich fabrics, adorned even with jewels. 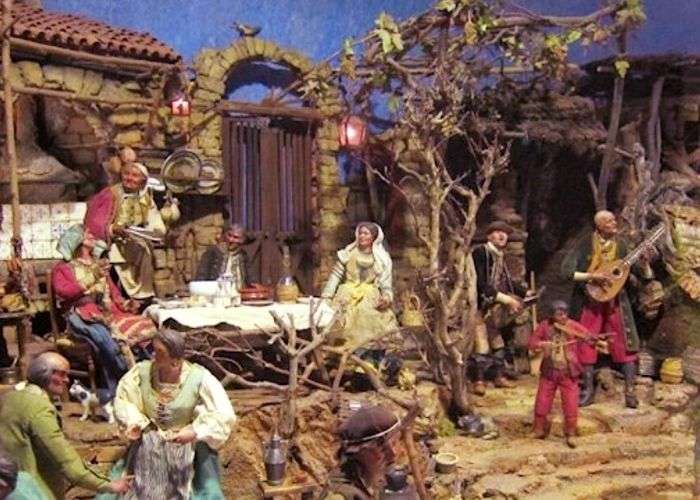 Detail of the Nativity Scene of the Museum of History of Madrid. Photography: PlanesConHijos.com

Free entry with a maximum capacity of 10 people and without prior appointment.

Guided tours: On December 16, 17 and 22, at 12 noon, the Madrid History Museum offers guided tours to learn about the history and iconography of the Nativity Scene.

From controladores.net We hope you liked this little compilation of the 6 nativity scenes in the center of Madrid that you cannot miss. If you visit Madrid this Christmas 2021, tell us what you think!