Since the French Georges Herpin put the term philately into the fray in 1984, this peculiar branch of collecting has been gaining popularity in our country. Interest in collect stamps and envelopes of famous people, moments in history, monuments, parties, etc. allows you to remember and preserve part of the folklore and local, regional or national heritage.

And, of course, Christmas and nativity scenes were not going to be alien to this collector's fervor. Are you accompanying us to discover some of the most curious stamps related to our passion? Let's see the link between nativity scene and philately: the nativity scene on stamps.

There are not a few countries that issue commemorative stamps on the birth of Christ around Christmas. Usually it includes religious themes, imagery or a simple festive motif. And the nativity scene has, of course, an important gap in these commemorations. In Spain, there are many stamps and postmarks that have been issued for nativity scenes, sometimes to celebrate prominent events. 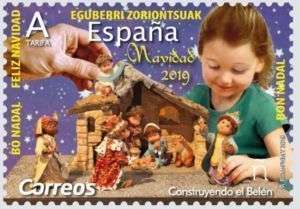 El Museum of the Nativity Scene in Jerez de la Frontera It has an exhibition section dedicated to the stamp. The room is called "Christmas in philately." In 2014, the Huesca Nativity Scene Association celebrated its 25th anniversary with a great program of events, including a philatelic exhibition related to nativity scenes. These types of exhibitions have been quite frequent around Christmas dates, generally organized by nativity scene collectives, philatelic or in communion of both.

It would be impossible to list all the stamps issued with this theme, a task that the company has been working on for some time. Nativity Scene Association of Álava this link. We would like to highlight the post office launch in autumn 1976, a series of two stamps with figures from the Gipuzkoa Nativity Scene Association. These are "The Mystery of the Nativity" and "Figure of Birth", corresponding to two 20-centimeter figures that the Basque association has owned since the 40s.

In 1987, the XXV National Nativity Scene Congress was held in Cartagena (Murcia), a reason that Correos took advantage of to issue a special postmark on the occasion of the event. This town has been fortunate to receive other postmarks for your nativity scenes events, like the Nativity Scene Philatelic Exhibition, very popular in the late 80s and early 90s, the date of which is this other one that we expose below (1991). 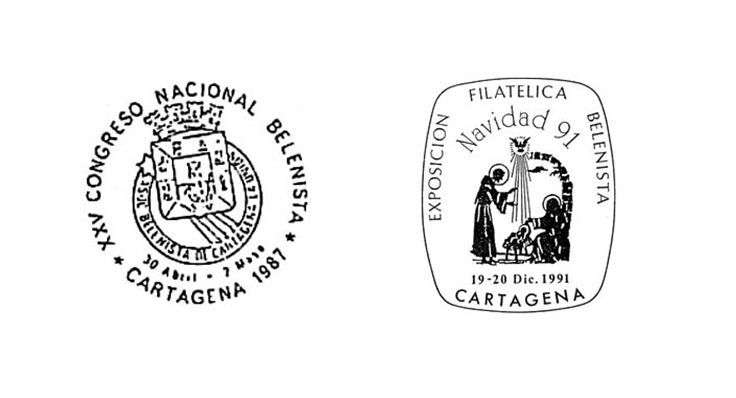 Commemorative postmarks for events in Cartagena. 1987 and 1991.

Nativity scene stamps around the world

Many countries have issued complete series, or individual stamps, with religious, Christmas or, more specifically, nativity scenes. In this gallery we see some of them.

And, to conclude the post… this week a commemorative stamp of the 75th anniversary of the Madrid Nativity Scene Association is put into circulation in Madrid and Barcelona. We leave you with the postmark of the first day. The same day a philatelic curiosity that will delight the most collectors freaks: the postmark of the Cantabrian Nativity Scene in Cudón, which "replaces" the figures on the portal with a typical scene from this Cantabrian area, the distillation of pomace in the Liébana Valley. 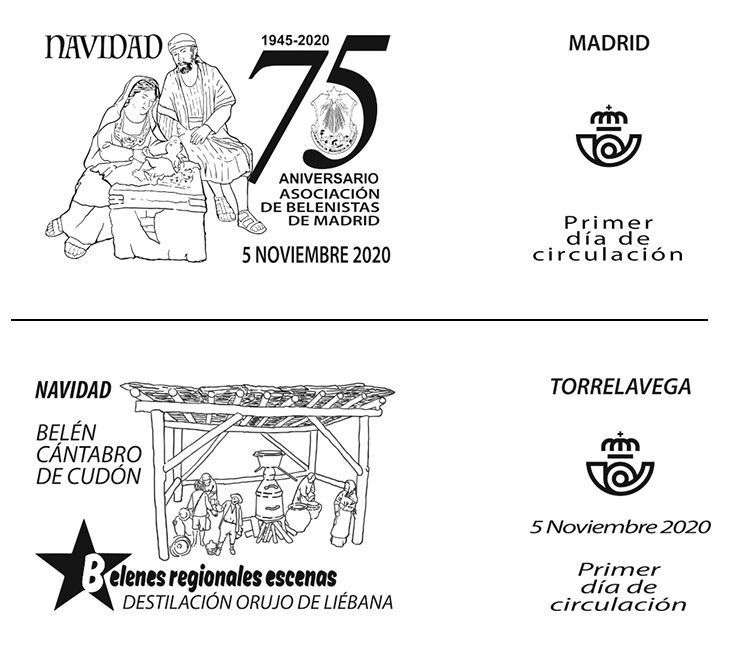